VIKTOR SCHRECK: But for far too long people have been treating each release of our software as a separate entity — as if, for example, Nifty Doorways 99 and Nifty Doorways 2001: An Operating System Odyssey were different programs, and covered under separate contracts. This is not the case.

VIKTOR SCHRECK: Similarly, when Nifty Doorways Verandah was released, it became Nifty Doorways, and any contractual rights regarding the use of Nifty Doorways applied to it, and it alone. So anyone using any other version is in violation of their End User License Agreement, and is engaging in software piracy.

JIM WASHINGTON: How does that threaten the security of the United States?

VIKTOR SCHRECK: It just does. 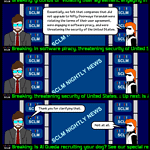 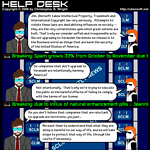 … And I Feel Fine

Should I Stay Or Should I Go