THE BOSS: So it appears the only thing standing in the way of my plan to dominate the webcomics market is that web cartoonists have the audacity to believe that as creators they are entitled to make decisions about how their work is used.

ALICE: That about sums it up.

THE BOSS: Preposterous! They have no right to prevent others from competing in this marketplace. They must be compelled to acquiesce to my demands!

ALICE: I don’t think they’re going to be willing to do that.

THE BOSS: They don’t need to be willing. They must simply accept he inevitability that they cannot shackle their product to their desks. Eventually it will escape them, and they will not be able to dictate the terms of its use.

ALICE: “Information wants to be free?”

THE BOSS: No. “Information wants to be MINE.”

Today’s title is a) relatively obscure, and b) pretty solidly wrong. For those of you who don’t know, Stewart Brand is the guy who originated the phrase “Information Wants To Be Free.” According to Wikipedia he uttered it at the first Hacker’s conference in 1984.

These days the phrase is used as a call to arms among the anti-copyright/copyleft groups, but at the time the complete comment was a lot more nuanced:

The Boss, obviously, is not interested in nuance, at least as far as this particular matter is concerned. 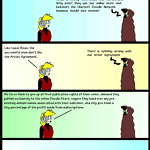 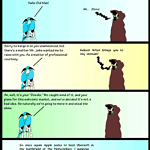 Lead With Your Logo