David Bernard struggles to open his eyes as he is suddenly inundated with the cold sting of ocean water rolling over his face.

He chokes, gagging as he tries to simultaneously expel the water he just inhaled and draw fresh air into his lungs. He panics for a moment as his body can’t seem to organize itself to do first one, then the other, but then he coughs, retches, and streams of ocean water come out of his mouth and nose. A moment later he breathes in—the air is sharp, and burns, but it’s a relief.

He looks down at his hands. They’re covered in white sand. He hears the roar of surf, and as he looks around he sees he’s on a beach.

A wave of dizziness overtakes him, and he falls to one shoulder just as another wave breaks, covering his face. He just manages to avoid inhaling, and scrambles to his feet before the next wave rolls in.

He’s dressed in BDUs. He’s armed: an automatic pistol is locked in a shoulder holster, and a combat knife is sheathed on his left hip. He’s also wearing a life jacket and a parachute harness.

Must have landed in water.

Another wave of dizziness overtakes him. He staggers, automatically bringing his hand up to his forehead, and draws it back when he feels something wet and sticky. There’s blood—he has a cut on his forehead.

He waits a minute, steadying himself, then looks up and down the beach. He’s not exactly dressed like he was in his military days, but it’s hard not to compare this to an airborne deployment. Since that’s the only thing that makes any sense right now, that’s what he goes with. If he parachuted in… did he do it alone? It seems unlikely. Who did he come in with?

He tries to remember. He panics as he realizes he can’t remember much of anything at all. The last memory he has is in the Suit, responding to a call downtown. Something about a metahuman going crazy, tearing up real estate…

The bus smashes into him harder than anything he’s ever felt in his life, he barely notices when he goes through the cinderblock wall—

The dizziness returns, and he has to sink to his hands and knees to get it under control. He’s hurt, probably suffering from a concussion, though the thought that’s not possible, they fixed that before we left comes unbidden into his mind. There’s no context for it, but apparently he feels very indignant that it didn’t turn out to be true.

He gets back to his feet and tries to collect his thoughts. He’s on a beach. He stops for a moment and takes it in: it’s hot and humid, the water is a very distinctive shade of blue, the sand is very white—he’s somewhere in the tropics. He’ll have to find a map to learn more.

He frowns, and starts checking his pockets. Does he have a map?

He should have a map. If he were going to agree to parachute in to an unknown destination, for whatever reason, he would demand a map. And a lot of other things.

His pockets aren’t empty, but they aren’t exactly informative: he has a rolled-up Boonie hat, six extra magazines in his tactical vest, a silencer of dubious quality, and a small first aid kit. The right inside vest pocket holds a few food bars, a waterproof compass, and a small LED flashlight. A small metal canteen hangs off his belt. The left inside vest pocket is a Rite-in-the-Rain water-resistant notepad and a Fisher Space Pen.

He travels further up the beach, putting himself out of the reach of the waves, as he glances at the notepad. His hands are shaking so badly it’s difficult to read—he doubts he’s going to want to use his gun any time soon—but he recognizes his own handwriting. It’s a fresh pad, and only the first page has anything written on it.

The date at the top makes him pause. Assuming the date is correct, he can’t remember the last two months.

The rest of what he wrote is suitably cryptic:

He frowns at the notepad. It looks like he was about to write something else, but it’s just an interrupted scrawl.

No avail map. That explains why he doesn’t have a map, but “Pt Libertad…” Libertad meant “liberty” in… Latin? Spanish? He can’t remember. Spanish would be likely if he were in the Bahamas, but without a map (no avail map) it’s impossible to tell. He takes out his compass. The needle wobbles for a moment, then slowly begins to rotate, first clockwise, then counter-clockwise, then clockwise again. It keeps switching direction after each rotation. He stares at it for a full minute, waiting for it to settle. It doesn’t.

He puts the compass back in its pocket and stares at the last line of the notepad. He has no idea who or what OM is. He doesn’t know anyone with those initials. A country, maybe? A political party? A corporation?

He looks up and down the length of the beach. He doesn’t see anyone, but he suddenly feels exposed. He supposes if he actually parachuted in here on some sort of mission—which doesn’t really make any sense, but nothing else does, either—that it’s probably a good idea to stay out of sight. There’s a forest beyond the beach. He puts the notepad back in its pocket and heads in that direction, walking briskly, trying to remain level to avoid making himself dizzy again.

David brushes his hand across his forehead. He’s still bleeding—he needs to take care of that soon. That’s his plan so far: stop bleeding, stay out of sight.

It’s not a great plan, but it’s the only plan he has.

The mid-morning sun beats down on his neck as he trudges toward the forest, asking himself the same questions over and over again:

Why is he here? 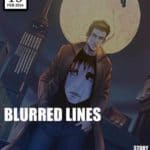 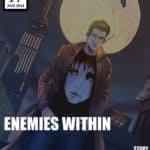 Curveball Issue 18: A Game of Secrets