Sergeant Alishia Webb sits in the Sky Commando Unit briefing room and shifts uncomfortably under the enigmatic gaze of the man in the suit and sunglasses sitting across the table.

The man nods once. “My apologies. Sergeant. Thank you for taking the time to talk to us.”

Alishia’s gaze drifts over to the man’s left, farther down the table, where the rest of his group—two men and three women—sit listening patiently. Their expressions are professionally blank, betraying nothing. Alishia’s Captain sits across from them, on her side of the table, arms folded. Her expression is professionally neutral. The Captain, among her many other talents, is good at wading through the shark-infested waters of local and federal politics in New York City, so Alishia isn’t surprised to see her poker face.

“There’s no need to thank me,” Alishia says, keeping her voice dry. “When the Captain tells me to do something, I usually do it.”

Usually. Alishia sees the Captain shift slightly out of the corner of her eye, and imagines the right corner of her mouth curling up into an almost-smile.

“Sergeant Webb,” the man begins again, “I understand this is abrupt and probably insulting. However, this is a matter of national security. We appreciate your cooperation.”

The man stares at her a moment longer, sighs, then says, “My name is Agent Phillip Henry. I work at the Department of Homeland Security, and we’re concerned about your predecessor.”

“You’re one of the assholes who kicked us off the Forrest investigation.”

Agent Henry nods. “I am the asshole who kicked you off the Forrest investigation.”

“And you’re investigating Bernard.” She doesn’t bother to disguise the hostility in her voice.

Alishia frowns and glances at Captain Lloyd. Her poker face is still up, Alishia can’t read anything. She looks back at Agent Henry. “What are you talking about?”

“David Bernard has been missing since Friday.” Agent Henry stares at her impassively, his emotions hidden behind the dark glasses. “He checked himself out of Bronx-Lebanon Hospital—against medical advice, for the record—and was last seen in the company of an unregistered metahuman vigilante who calls himself ‘Brother Judgment.’ No one has seen him since.”

Alishia pushes back a nagging worry and shrugs. “I guess it’s his business.”

“I guess it isn’t,” Agent Henry says. “As I said, this is a matter of national security.”

“National security,” Alishia says, trying and failing to keep the scorn out of her voice. “You expect me to believe that—”

“I don’t care what you believe,” Agent Henry says. He’s tense; he leans forward for emphasis. “I have a legitimate and lawful reason to find David Bernard and you have a professional obligation to help me.”

Alishia glowers at him.

“For what it’s worth,” Agent Henry continues, “I think he’s being used. But we are certain that, intentional or not, he has passed on classified information to foreign hostile powers—”

“What?” Alishia is out of her chair. “That is the stupidest—”

“Do you know Peter Travers?”

The question is so unexpected that it stops Alishia cold. She sits back down in her chair. “Yes.”

“This morning Agent Travers confessed to telling Mr. Bernard that he was under Federal surveillance. He also confessed to passing on sensitive information. We believe Travers has manipulated Bernard into passing that information on to an unknown, hostile third party.”

Alishia shakes her head. “Travers? That’s insane. There’s got to be—”

“Immediately after confessing to these acts,” Agent Henry says, “he used a neurotoxin to incapacitate the agents sent to apprehend him.”

“I… find that hard to believe,” Alishia says.

“So do I,” Agent Henry says. “And I was one of the people he attacked.”

Alishia doesn’t reply. She’s trying to process this information. She’s not sure she believes this guy, but she’s also not sure why he’d lie.

Agent Henry frowns, then looks over his shoulder at the other agents sitting to his left. “We need to vet her and read her in.”

“There’s no reason to vet her,” Captain Lloyd says.

Agent Henry sighs. “You know there is.”

Alishia looks at the Captain. “Vetted for what?”

The Captain sets her jaw. “You don’t have the authority.”

“Not without your permission,” Agent Henry agrees. “It is my hope you will give that permission.”

“Permission for what?” Alishia says, raising her voice just a little.

“We’re going to have to go through channels first,” one of the other agents protests.

Alishia’s eyes widen. “You’re using the Patriot Act on me?”

“Sergeant Webb, I am trying to put you in a position where you will understand what’s going on,” Agent Henry says. “In order to do that I need to use a metahuman ability that will compel you to speak the truth. It will only be for four very specific questions.”

“Yes.” Agent Henry sighs and rubs the bridge of his nose. “Sergeant. Under normal circumstances I would be required to fill out paperwork and get a judge’s authorization before I could use an ability that would compel you to tell the truth. Until I use that ability I cannot officially verify that you are not a security risk. I am under strict orders not to read people in unless it have been officially verified that they are not a security risk.”

“I see,” Alishia says. “Well. That puts you in an awkward position.”

“Fortunately, your role as Sky Commando allows me to invoke Section 1125 under Title XI of the Patriot Act in order to expedite matters in an emergency. Which is what this is, Sergeant. Captain Lloyd will serve as a witness on your behalf, to ensure that I ask nothing inappropriate.”

Alishia thinks it over. “Fine. Let’s get this over with.”

“Very good.” Agent Henry takes off his sunglasses. “Please look me in the eyes, Sergeant.”

Alishia meets his gaze. He has green eyes. A moment later her gaze locks into them, and she feels her muscles tense involuntarily.

“I’m going to ask you four questions,” Agent Henry says. He looks uncharacteristically apologetic for a Federal agent. “Four yes or no questions. If you answer yes to any of them, I may ask a follow-up question for clarification. Bear in mind, Sergeant, that I don’t have the power to force you to speak. Anything you say to me, for as long as we maintain eye contact, must be the truth—but you can remain silent, and although it feels difficult to do, you can also break eye contact at any time.”

“First question,” Agent Henry says. “Are you now or have you ever been involved in a conspiracy against the United States of America?”

Agent Henry nods. “Second question: are you in any way involved with the person or people responsible for the murder of Alexander Morgan, also known as Liberty?”

“Third question,” Agent Henry says. “Are you involved in a conspiracy to cover up or otherwise impede the investigation into Liberty’s murder?”

“Final question,” Agent Henry says. “Do you suspect anyone you know of being involved in a conspiracy to cover up or otherwise impede the investigation into Liberty’s murder?”

Agent Henry raises an eyebrow. “Interesting. I have a follow-up question. Whom do you suspect of being involved in a conspiracy to cover up or otherwise impede the investigation into Liberty’s murder?”

The other agents laugh quietly. Agent Henry’s mouth twitches once, then he puts his sunglasses back on. “That’s fair enough.”

He looks at Captain Lloyd. “I have no objections to reading her in.” He turns to the other agents. “Agreed?”

The other agents murmur their assent.

Agent Henry turns back to Alishia. “Sergeant, have you ever heard of Division M?”

“We’re the metahuman branch of the Department of Homeland Security. We’re not like the FBMA—we don’t specifically monitor and respond to metahuman threats. We are metahumans.”

“The attack on the Forrest residence has convinced us that whoever was responsible for Liberty’s murder has influence in the local enforcement community. By ‘local’ I am including the local Federal branches involved in the investigation as well as the NYPD.”

“Seriously?” Alishia looks at him in disbelief.

“Seriously. The Forrest residence was supposed to be under surveillance the night they were attacked. Someone disrupted the surveillance schedule. If they hadn’t, law enforcement would have been on the scene much faster than it was.”

“Yes.” Agent Henry shakes his head and lets out a quick hiss of frustration. “It was someone at a high level—someone who had access to that schedule. But we don’t know who, and we don’t want to tip them off that we’re looking for them.”

“I get it now,” Alishia says. “That’s why you took over the investigation the way you did. You wanted everyone to think that the Feds were moving in to take charge, in a typically insulting fashion, in order to make sure the mole was frozen out without knowing why.”

Agent Henry nods. “We are bringing people back in where we can, but it’s slow going. Captain Lloyd was brought in last week. We wanted to make vetting the Sky Commando unit a priority, but this business with the new attack, and now Bernard and Travers… well, it complicates matters.”

“Maybe,” Agent Henry says. “You know him better than I do. But if you were to tell me that Peter Travers was going to do what he did today, I would have laughed you out of the room.”

“Deployed from the sprinklers. He’d obviously planned for this moment for a long time.”

This is crazy. Alishia sorts through everything Agent Henry said, and that’s the only thing she can come back to. This is completely crazy. It makes no sense.

But that’s not surprising—she doesn’t have the whole picture. All she sees are pieces, and the pieces are too different to fit together comfortably. She needs more pieces, which means she needs to investigate. It looks like Agent Henry, for whatever reason, is willing to give her the chance to do just that. 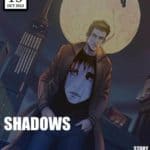