UPDATE: Based on what I have to assume is the blistering outrage from the masses, including some people of considerable importance in the speculative fiction arena, Spots the Space Marine is once again available for Kindle on Amazon.com.

They are most famous for their Warhammer 40K minature-based wargame, but the game I love the most was their Warhammer fantasy role-playing game. When they first published it the rulebook came in an absolutely gorgeous hardback, filled with color pictures of the world it took place in (an alternate-history earth filled with chaos and magic and elves and Other Nasty Things), pictures of the gods in their various pantheons, and some great material that really gave you a feel for their world. Imagine Lovecraft in a fantasy world, but where the general population is mostly aware of the threat of the Elder Gods and has said “no, we won’t just stand by and be food.” Terrible, epic, nearly futile, magnificent struggle against dark forces that corrupt from without and within. Great stuff.

Screw those guys. I don’t know what happened to that company, but they don’t exist any more. The guys who exist now are accusing a friend and colleague of violating a trademark, and they are preventing one of her books from being sold as a result. The author is M.C.A. Hogarth, who I have reviewed on this site before. Her book is called “Spots the Space Marine,” which was a successful web serial before it was published.

What is the trademark Games Workshop is accusing her of violating? “Space Marine.”

M.C.A. Hogarth has written about this in detail on her own site, but let me give you the basic rundown:

Going beyond that, Games Workshop is trying to assert a trademark (“Space Marine”) against a genre (Science Fiction) that has used the term “space marine” longer than the founder of Games Workshop has been alive. As M.C.A. points out, it has been used in Science Fiction for a very long time. Wikipedia lists the earliest use of “Space Marines” in a work of Science Fiction as a short story called Captain Brink of the Space Marines,” written by Bob Olsen in 1932. Space marines have been referred to in-story in works by E.E. Smith, Robert Heinlein, Larry Niven, Jerry Pournelle, David Weber, and John Ringo (to name a few).

I recognize there are specific areas (i.e., miniature based war games) where Games Workshop’s trademark of the term is appropriate, but within the world of fiction, in the genre of Science Fiction, it is profoundly generic.

Still, M.C.A. can’t afford to go to court. So Games Workshop is going to win the battle.

I, however, would like to see them ultimately lose the war. I would like to see them die a painful corporate death by watching their sales disappear overnight, by being unable to generate any new revenue because people get tired of them and stop buying their stuff. If M.C.A. can’t win against Games Workshop then I would like to recommend we all get together and start kicking them in the jellies over and over again (metaphorically speaking only–don’t go getting yourselves arrested) until all they can do is curl up on the (metaphorical) sidewalk, gasping for breath (metaphorically), watching all their money go away.

That last part isn’t metaphorical. I’d actually like to see all their money go away.

Also, if you’re so inclined, her book Spots the Space Marine is still available for sale on Amazon in Trade Paperback format.

It is also still for sale as an eBook on Smashwords and Barnes & Noble. If you’d like to show her your support, buying it would be a great way to do just that. 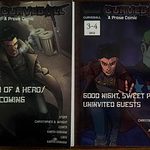 Once Upon A Time

An Apology to Self-Publishers