He stares straight up at the triangular lights, unable to blink. He can feel—the hard back of the gurney, the sting of the leather straps as they cut into his flesh—but he can’t move. He’s not sure the straps are necessary: whatever they gave him has paralyzed him completely. He can’t even move his head.

“Jack.” His voice is hoarse. He barely recognizes it as his own.

“What the hell is your problem?” He tries to get his voice to sound more like his own—the way he remembers it—but he can’t clear his throat. “They’re not cutting you.”

“You’re a good guy, Thomas. I never thought I’d say that to a cop, but you are. And you’re tough. Honestly, I thought you’d be dead a week ago… and so did they. That’s the problem. They’re not interested in whatever their original experiment was. Now they’re just trying to see how far they can push you before you die.”

He tries to strain against his bonds. He doesn’t even twitch. “I guess I should be flattered.”

“I’m not saying that because I want you to. I’m saying it because you should. Because at this point, they’re hoping you won’t. They’re hoping you’ll keep fighting them, and hanging on, so they can keep torturing you. They’re really getting off on it, man. Just give up and die, so you won’t have to scream like that any more.”

“No.” He’s surprised by the vehemence in his voice. “Not gonna happen.”

“Thomas, I’m not saying it because—”

Liquid steel washes over him, crushing him, trying to expel him. He can feel it breaking his body apart, just as he can feel his body knitting itself back together, and somewhere in all that pain he loses himself to blind, feral rage. His screams—silent as they are, engulfed as he is in an ocean of metal—are not screams of desperation, but screams of pure, defiant rage.

He kicks. He claws. He lashes out with everything he has, churning, twisting, trying to find purchase. It connects with nothing—it’s like being tied to concrete while fighting in a swimming pool—but he fights nonetheless. He fights purely on instinct, indeed there are times when instinct is the only part of him that is actually alive—but the instinct is not get out, get out of this before you drown. The instinct that drives him on is an echo of his last sane, conscious thought:

And so Vigilante fights… and as he fights, he is screaming.

The minute Jenny steps into the hall she starts running. The guard turns toward her, surprised, and she can hear him shout a warning from beneath the gas mask as he raises his rifle and fires quickly. The first shots ricochet off the left wall, causing the soldier to flinch and take a step back into the room, using the doorframe as cover. Jenny falls back into a slide just as she crosses the doorway, and more bullets fly overhead from other assailants as she reaches out, snags the soldier’s ankle, and pulls hard.

She stops sliding abruptly, and the soldier slips forward, letting go of his rifle as he tries to keep his balance. The rifle swings wildly from its shoulder strap as the man grabs the doorframe for support. Jenny hooks her legs around the vault door and pulls again. It’s no contest: the soldier is ripped away from the doorframe, falling on his back with a thud as she pulls herself and her captive around the heavy steel door. She hits him in the face a few times, trying to ignore the sickening crack of the gas mask and other things as the guard stops moving.

She hears the other people in the room shouting now, and hears them scuffling about as they choose their positions. Three in all, she thinks. She looks at the soldier, looks at the assault rifle still tangled in its strap.

What do I know about these things? I’ve never held one in my life.

Gritting her teeth, she snaps the strap in two and grabs the rifle.

You don’t have to be Street Ronin, Jenny. You just need to know which end to point. You know you can do that much…

Something clatters into the hallway and bounces off the wall—a small, round object that looks like a bumpy green

She’s off the floor and halfway up the vault door when it explodes. The door sways slightly, and she hears something tear into the other side of it, but she’s unharmed. Another goes off seconds later, then another. Each time the door sways, and the third time she can feel the outer skin buckle and warp as shrapnel almost tears through. Ears ringing, she throws herself over the top of the vault door, rifle firing as she lands. The hallway is smoky and her ears are ringing, but she can see three more soldiers hiding behind half-empty shelving. She crouches and rolls into the room, still firing her rifle, not bothering to aim.

It’s a large, rectangular room, full of shelves and crates and filing cabinets. There’s a main aisle in the center, running from the vault door to the very back of the room, where the wall is filled with a row of wide metal lockers. Twelve rows of heavy shelving units, each five shelves high, sit on each side of the aisle. The bottoms of the shelves are stacked solid with metal crates, but they thin out by the third shelf, and Jenny can see the tops of three heads, crouching behind shelves toward the back.

She runs, hearing bullets strike the floor, the shelving, the walls, even one or two bouncing off her armor. She discards the assault rifle as she races across the aisle, speeds down the length of the shelving unit on the opposite side, and finally leaps into the air when she reaches where the shelf meets the far wall. She grabs the top of the shelf and pulls, places her feet against the wall and pushes, and though the shelf wobbles dangerously it gives her the leverage she needs to twist into a somersault and throw herself over the top. She clears three shelving units before the soldiers realize what happened, and by then it’s too late—she smashes into a shelf, causing it to wobble and ultimately fall on top of a very surprised soldier, who finds himself buried under a number of very heavy crates. Jenny climbs to her feet, sees the top of a second soldier’s head on the other side of a shelf that’s still standing, and pushes as hard as she can against the crate sitting between them. It flies off the shelf with unexpected force—she’s still getting the hang of her own strength—and she hears it impact against the soldier with a loud, wet thud.

Two down, but she’s sure she heard three people moving…

She sees the shadow before she sees the person, an indistinct form darting past her right shoulder. She grabs another crate, turns, and throws—a single bullet ricochets off it before it crashes into the side of the shelves on the third row from the door, and she hears a muffled curse as she sees a hand and shoulder disappear behind it. She runs, trying to press her advantage, but when she’s only steps away from the shelf she sees a blur of motion, and suddenly a thick pair of boots are flying directly at her face. Her arms go up and she knocks them aside, and the legs attached to them, but even as the man grunts in surprise she reels as something smashes hard against the side of her face. She stumbles, staggers back, and her vision clears just as the man picks himself off the floor.

Blond hair, cold blue eyes: Johann Richter, the man who murdered her great-grandfather in cold blood, faces her for the second time.

“It’s working! I think it’s actually working!” Agent Hu shakes with the effort it takes her to generate heat, but she manages to hurl another ball of plasma at the golem, striking its chest. She’s not even bothering to fly, at this point—too much effort. Instead, she relies on Jack to keep it occupied while she bombards it from a distance. This tactic isn’t working well for Jack, who’s starting to feel the effects of the golem’s repeated blows, but he throws himself into it with everything he has, trying to focus on a single spot on the thing’s leg, attacking it over and over and over until it’s forced to spend time fixing it.

But it’s whatever Vigilante’s doing that hurts it most. Liquid metal erupts from the golem’s chest in massive spouts, falling back into itself as it tries and fails to solidify. It can’t. Vigilante won’t let it.

Occasionally they catch glimpses of the man… or what’s left of him. It’s usually an arm, though occasionally they see a leg, and once they saw his face, covered in that silvery substance as it streamed down his throat. It’s impossible to tell how he’s managed to stay inside the golem as long as he has, but it’s having an effect: it’s down to half of the strange marks on its leg. Everything else is gone.

That’s what keeps them fighting. Even though Hu is so exhausted she’s about to keel over, even though Jack is starting to feel every crushing blow descending on his head, they fight on. Watching each pip disappear, seeing the marks dwindle as fast as they have… they’re close. They’re very, very close.

The golem’s chest shoots out a jet of silvery liquid. Jack can see Vigilante twisting, desperately clawing his way back into its chest.

The golem’s chest collapses in on itself, trying to grind Vigilante to dust. A mangled hand emerges from the silvery liquid, then disappears.

The golem shoots another spout of liquid, this time erupting from its back, arcing over its head, and returning into its chest. That seems to do no good at all—Vigilante isn’t seen at all during that display.

The golem stands completely still, save for the liquid patch on its torso that simply won’t heal. A low thummm radiates from it, and the purple symbol on its torso glows brightly. The thummm increases in intensity, and the golem begins to vibrate.

The thummm stops. Every piece of the golem transforms into a silver liquid and falls to the ground, forming a silvery pond in front of the wreckage of Warehouse Six.

“What…” Hu stares at the puddle, reaching for words and failing to find them.

The thummm begins again, and the liquid flows away from its original spot, farther down the warehouse complex, toward Warehouse Seven. As it moves, it leaves behind a twisted, mangled husk of bone and flesh. Then the liquid twists and flows together, reforming into the shape of the golem, whole and untouched.

The twisted husk of bone and flesh twitches. Something that might be a limb reaches out toward the golem, then falls still.

Jack wipes the sweat from his brow as he prepares for the golem’s next attack. He looks down at his hand, and is surprised to see blood. 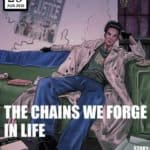