Artemis and David have been at the small house on the beach for four days, trying to decide what to do.

The library was acceptable as a base of operations when the focus of their activities was the palace, but when it became clear that was no longer the case David decided Artemis needed access to a real bed and a refrigerator stocked full of healthy food. Artemis didn’t object—he was subdued for most of the short trip back, brooding silently over the discovery that the books he’d counted on retrieving—the purpose of their trip to the island to begin with—were gone. And that they were taken, apparently, by a copy of himself.

An evil copy of himself.

Artemis spends the first three days at the house sleeping, for the most part, and eating ravenously when he’s awake. His appetite is a good sign: David guesses whatever it is that makes Artemis a metahuman helps him bounce back from trauma more quickly than most. A lot of metahumans are like that, to one degree or another. David finds it intensely frustrating.

On the fourth day Artemis wakes up by mid-morning and shuffles out to sit at the small kitchen table. He pages through the newspaper, sighing softly as he reads the headlines.

“LaFleur.” David stands in front of the table, arms crossed. Artemis glances up at David briefly, then returns his attention to the newspaper.

Artemis sighs and pushes the paper away. “I know. I’m afraid I’m not quite myself at the moment.”

“C’mon, LaFleur, setbacks aren’t new. You’ve even been soundly defeated, from time to time. That never kept you down before.”

Artemis frowns slightly. “I hadn’t suffered torture for a year before being defeated by myself. Or a part of myself. Or a… I don’t even know what it is. I’m not giving up, David, but I need some time to gather my strength.”

“Tough.” David hardens his voice just a bit—adopting a little of the hardass persona he used when he put Alishia through her paces in the early days, before he even deigned to call her rookie. “We don’t have time for it. Look, LaFleur, I know you’re hurt. I also know about working hurt. I followed you into this mess with a concussion—my second—and I got a third my first day on the island. Too many more and I won’t be able to tie my shoes without help. I’m not asking you to do jumping jacks, I’m asking you to help me come up with a plan. Strategy is kind of your thing, being a big-time supervillain and all.”

“First,” Artemis says, “I was tasked with trying to determine what kind of magic we’re dealing with. I no longer have any direct, in-depth knowledge of magic because of the strange symbiosis magical power shares with its host, so I brought us here—this island was the only place where I knew I could find reliable texts about magic. We need reliable texts because most of the books you’ll find that purport to have anything at all to say on the matter are rubbish.”

“Second,” Artemis says, “the texts I was looking for are gone. However, the wards I created to protect those texts are still present. I have forgotten most of what I know when it comes to magic, but I remember enough to know that if someone else had removed the books, it would have destroyed the wards. The only logical conclusion is that I removed them… but I have no memory of doing so. Thus I conclude that the magical power I once had—the power I thought I had sacrificed in order to cast my final spell—somehow survived, and the wards recognize it as ‘me’ because it was that magical power that erected the wards in the first place.”

“What would a sentient mass of magical power want with a bunch of books?” David asks. “Doesn’t it already know magic?”

“It knows magic as well as I did, when it was a part of me,” Artemis says. “Or perhaps a little less, if it exists without a human host. It would certainly have use for the books if it intended to… I don’t know what it would intend to do.”

“All right,” David says. “We’ll table that speculation for another day. Where does that leave us?”

“Nowhere,” Artemis says. “We have nothing. There’s little else to do but attempt to return home, to our time, and tell Curveball and the rest that we’ve failed.”

“Oh?” Artemis looks skeptical. “What am I forgetting?”

David points at Artemis’ chest. He’s wearing a loose-fitting golf shirt—something taken from the original owner’s closet—but his hand automatically goes to a spot just beneath his right collarbone, where the beginnings of an intricate and wholly unnatural rune are buried in his flesh. David has seen the entire symbol, and he knows it covers the older man’s upper torso.

“You said the crazy wizard put his memories into it. Every single memory he had of you.”

“Just humor me for a second,” David says. “You said he bound the memories to you because you weren’t trapped by the island. The idea being that bound to you, his memories of reappearing on the island wouldn’t reset, and if he could reclaim them, the fact that he had memories the island couldn’t reset would free him from the island.”

“Why all of his memories of you? And why did they have to be about you anyway? Why not just bind a trivial memory of what he did that morning?”

“In reverse order: It had to be a memory of me because he was binding it to me,” Artemis says. “I don’t remember enough to properly explain it, but it’s a kind of sympathetic magic. Because this symbol contains memories of me in it, it stays in my flesh. If it were a memory of something else the spell would have nothing to attach itself to.”

“OK. Why every memory of you he’s ever had?”

“OK,” David says, “here’s my point. This thing on your chest contains every memory this guy, Artigenian, ever had of you.”

“So it has every memory he’s ever had of teaching you magic.”

“What’s more, it has every memory he’s ever had of not teaching you magic. Every time he made a conscious decision not to teach you something, to hold something back… that’s a memory of you. That’s something he’d put in there. So the big double-cross with the world-ending spell, that’s in there.”

“A reasonable assumption,” Artemis says. “But it doesn’t matter, because we have no way of accessing it. You need magic to access it. I don’t have magic. I can’t interact with the thing on my chest in any way.”

Artemis opens his mouth to protest, then stops, frowning as he thinks it over.

“I don’t really understand it,” David says, “but you and I have both seen it. When I lucid dream on this island, the island interferes with it, and I can interfere right back. I’m not actually casting spells, but I am interacting with magic somehow. I’m pretty sure that’ll only work here, and I’m pretty sure it only works here because reality is… not entirely real here.”

“So I figure this is an opportunity,” David says. “I fall asleep, start lucid dreaming, then project myself over here and my dream-self tries to absorb all those memories.”

“What you are suggesting is… irresponsibly dangerous,” Artemis says.

“It’s not my favorite plan,” David admits. “Look, LaFleur, before we got to this island I thought magic was basically just another metahuman ability. I was wrong. I thought Curveball was freaking out about magic because it was his… weakness, the same way Permafrost freaks out about heat. I was wrong. The truth is, magic is exactly the way you described it at Crossfire’s safehouse: it’s alien. I saw what happened when you cast the spell that ended the world and I still can’t really wrap my brain around it. If that’s actually part of what we’re fighting… we don’t have a choice, LaFleur. Somebody needs to know about it. I’d rather it be almost anybody other than me, but… it’s gotta be somebody.”

“Your last fight as Sky Commando,” Artemis says. “I read the report on it shortly after you were put on medical leave. I like to keep tabs on New York City for a number of reasons, and you being sidelined was a not insignificant development.”

Artemis smiles slightly. “Your last fight was with a villain calling himself Leviathan.”

“Yes,” Artemis says. “He hit you with a bus. Knocked you through a cinderblock building. Both sides. That was the fight that ended your career.”

“Thanks for reminding me,” David says.

“What interested me,” Artemis says, “is that as far as I could tell, based on the reports I read, you had time to avoid it, and you didn’t. You made the tactical decision to be hit by that bus. I want to know why.”

“I was tanking,” David says.

“It’s a video game thing,” David says. “In multiplayer games you’ll get one guy who armors up and tries to keep the bad guy occupied so the more fragile players don’t go down. Normally emergency response crews hang back until an active threat is taken care of, but when I arrived on the scene they were trying to get civilians out of the area because Leviathan decided he was gonna pick up a bus and start pulping anything that moved.”

David shakes his head. “I don’t know how a guy that big managed to get so many drugs in his system, but he was obviously gone. He just wanted to kill things. And I didn’t have many options. I couldn’t use the stuckeys because there was too much debris, too many civilians trying to get away—rapidly expanding and hardening foam is dangerous when rocks and bits of twisted metal can fly in every direction. The asshole already had the bus, the only thing I could do was get his attention and keep it long enough for some of the others to respond.”

“It’s part of the job,” David says. “Sometimes you have to take the hit.”

“We don’t know how you will react,” he says. “When you try to absorb Artigenian’s memories, anything could happen, but I strongly suspect that you will find the ordeal excruciatingly unpleasant, and even if it goes well you’ll probably be disabled for a while.”

“The other thing to consider is what will happen to the memories when they are released,” Artemis says. “Will you actually absorb all of them? If they’re released, will they return to Artigenian? Artigenian getting his memories back is the worst-case scenario, so we have to plan for it. As soon as this happens, we’ll need to get off the island, regardless of your condition.”

“Can you handle that?” David asks.

Artemis shakes his head. “Not at the moment. But if you give me a week to rest—actual rest, not listless despair masquerading as recovery—I will be strong enough to make sure we leave this island before anyone can stop us.”

“One week,” Artemis agrees. “Then we leave.” 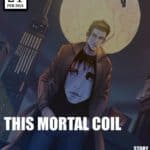 Curveball Issue 20: The Drums of War