CB sighs and grinds out his cigarette on the table. “We never talked about that night again. My choice. Never talked about it at all until now, actually. I wasn’t ready to hear it when he told me, but eventually I understood. Fortunately your mom and I split for other reasons.”

“What happened?” Jenny is still trying to figure out how she feels about CB’s story. She doesn’t remember her great-grandfather being sad about anything. He was always so happy around her, and around Andy… but CB wasn’t describing a happy man.

“Well you know the story about how it’s hard being married to a cop. Your dad says he lucked out because the only thing your mom had to compare it with is dating a hero, and a cop’s life is cake by comparison. I mean Christ, in one year she was kidnapped fifteen times. That’s more than once a month. 1989 was pretty exhausting.”

“So she got tired of being kidnapped?” Jenny wrinkles her nose. “That doesn’t really sound like mom. I mean, she wouldn’t let that stop her if she really wanted something.”

“That was just a symptom,” CB says. “The problem was the job. The job always came first. I mean, I adored Juliet, but if there was a hostage situation on the radio or the TV I was out the window pulling on my pants faster than you can—”

“Pulling on your pants?”

“I’m OK with not hearing any more about that.” Jenny’s cheeks are bright red.

“… right. Well, it pissed her off. Can’t blame her. That’s the way it was, though. So we split, and she was mad at me for a while. Then she met Marty, who was perfect for her in every way, and a genuinely great guy to boot. She fell head over heels in love with him, and suddenly she wasn’t mad at me any more.”

CB shrugs. “You’d have to ask her for the specifics there.”

“That’s sweet,” Jenny says. “Was there ever anyone else?”

“What, someone serious?” CB grimaces. “Not after. Alex was right. That’s… it would be cruel, in the long run.”

“Anyway,” CB says, “back to homework.” He flips up the laptop and starts reading again.

Jenny sighs. The conversation has been far more depressing than she expected.

“Oh, God, my eyes,” CB moans. He leans back and rubs his face. “I’ve been looking at that screen too long. It sucked my eyeballs dry.”

“It was probably the smoking.” Jenny allows a hint of disapproval to touch her voice. “There’s no ventilation.”

CB mutters something, then stands. “Your turn. I need you to read me the dummy corporations listed in Appendix K. Out loud.”

“Oh, come on,” Jenny complains. “Let me do something useful. Let me try to decrypt great-granddad’s email. That probably has everything we need in it.”

CB shakes his head. “Something in Travers’ report bugs me. I can’t put my finger on it.”

“Of course it reminds you of something,” Jenny says. “You were there.”

“Smartass.” CB grins appreciatively. “No, something recent. Now quit complaining and read out loud. Welcome to the glamorous life of being a sidekick.” He sprawls on the couch, puts up his feet, and covers his eyes with one arm.

“Stop.” CB lowers his arm, perks his head up and stares at Jenny intently. “Read that last part again.”

“TriHealth!” CB almost shouts the name. He swings his feet to the floor and sits upright, eyes wide. “Fuck! That’s too big a coincidence to be a coincidence.”

“Hold on…” Jenny scrolls through to the back of the appendix. “It says here that TriHealth was a health insurance company that PRODIGY used as a front for money laundering. A lot of its managers went to jail… but it bounced back. It seems to be a legitimate company now.”

“Yeah, it sure is,” CB says. “And I ran across that name the night Alex was murdered, when I was investigating a serial killer.”

“When you were what?” Jenny asks.

CB fills her in on the bodies at the beach, and his investigation at the Farraday City morgue. “The thing is, none of the victims had anything in common. Nothing that jumped out at me. But now that I think of it, when I was reading through the victim profiles, at least one victim in every group listed TriHealth as their insurance provider.”

“Well it’s health insurance,” Jenny says. “Someone’s going to have it, right? I bet one person in every group had Aetna, or Blue Cross.”

CB closes his eyes. “Nope. Only two people with Aetna. Hold on. I need paper and pencil.”

He walks out of the room, leaving Jenny to stare at the door in mild confusion. A minute later he comes back with a list of names. “Search for these and tell me if they’re anywhere in this appendix.”

They are. Every name on the piece of paper is also in Travers’ appendix. Some are other dummy corporations, others are companies with suspected, but unproven, ties to PRODIGY.

“What are these?” Jenny asks.

“They’re the names of other health insurance companies the victims had. Look, this is sort of a long shot, but it’s a weird coincidence, and I have a habit of tripping over those. So I’m going to check it out.”

“No, better not. Try getting into that encrypted file instead.”

Jenny sighs. “At least I get to do something.”

“Elliot should be by later with some extra supplies,” CB says. “Check with the security cameras before you let anyone in. And only let Elliot or me in.”

“I don’t know about that,” CB says. “You’re the one who wanted to come along.” 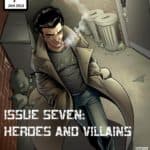 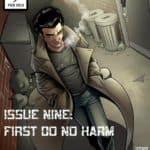