CB wakes up suddenly, disoriented. He’s staring at the roof of Jenny’s car. He can hear the motor, feel the car vibrating as it rushes down the highway. The radio is playing softly—he focuses on that for a moment, realizes who’s playing, and instantly regrets it. He hates Jenny’s music. He hated it ten years ago, and her tastes haven’t improved.

CB doesn’t reply. He still feels an odd, aggressive exhilaration that he hasn’t felt in a long time.

“CB?” Jenny glances over at him quickly, frowning. “You awake? You were having a hell of a dream.”

“I was?” CB’s tongue feels thick. He half-remembers tasting blood. He wipes his sleeve across his mouth, but it’s dry.

“Yeah,” Jenny says. “You were tossing around on the seat, muttering something under your breath. I couldn’t tell what it was. You sounded pretty mad, though.”

CB connects the exhilaration to a memory. New Year’s Eve, New Year’s Day. 1984. He feels a sudden thrill of freedom—the same thrill he felt when he made his first important decision.

And made the wrong decision, he reminds himself. But a little voice in the back of his head says was it? And he doesn’t know the answer to that.

“Yeah,” CB says. He sits up in his seat, adjusting the back so it’s in the upright position. “Dreams about the past. They’re not always fun.”

“I know.” CB yawns and stretches. “His were much worse than mine. He saw concentration camps. I got to see the Talking Heads.”

CB forces himself not to answer.

“You were only asleep for about an hour,” Jenny says. “We’re almost to Trenton.”

“We… wait, we’ve been through tolls?” CB is wide awake now.

“They know where we are,” CB says.

“Who knows where we are?”

“The bad guys. The bad guys know where we are. I was tired and not paying attention, but I’m pretty damned sure they were.”

“Paying attention to what?” Jenny snaps. “For Christ’s sake, CB. I know I’m new at this, but I’d appreciate a little detail…”

“Travers said his group was compromised, right? Well Metahuman Affairs was on the scene, questioning all of us about how I… you know. Totaled your dad’s house. In self defense.” CB adds the last bit somewhat defensively.

“You think someone in the FBMA is working for the bad guys?” Jenny asks, looking shocked.

“It doesn’t have to be one of the ones at the scene,” CB says. “It just has to be someone with access to the reports. At this point they know I’m not around, and they know you’re not around. And if they’re not stupid—which they aren’t—they probably also know that the EZ-Pass registered to your car paid a toll to get into Jersey.”

CB points at the tiny box mounted on Jenny’s windshield.

“Yeah,” CB agrees. “So… they know we’re in New Jersey. We’ve got to make sure they don’t learn anything else.”

Jenny reaches into her back pocket and pulls out a smartphone. She turns it off, then sets it in one of the cupholders. “Do you have a cell?”

“Right…” Jenny rolls down her window, pulls the EZ Pass off the windshield, and throws it out onto the road. “Battery’s welded to the motherboard. Guess I’ll have to report it stolen.”

“I guess I won’t be using credit for purchases,” Jenny adds. “Not for a while. Which is a problem, actually. I don’t have a lot of cash, and we’ll need gas and toll money.”

“No problem,” CB says. “Pull into the next gas station.”

Jenny frowns. “You’re not going to rob it, are you?”

“What the hell, Jenny? No. Just pull into a gas station. Or a rest area. Or something.”

They pull into a rest area. It looks like a small shopping mall, complete with a food court. Most of the shops are closed, but one still has a guy sitting behind the cash register, nose buried in a book. He looks up once as they walk in, decides they aren’t worth paying attention to, and returns to his reading.

CB grabs two cokes out of the soda dispenser and takes them up to the counter. The man reluctantly puts his book down and swipes both cokes through the scanner.

“That it?” The man sounds tired and grumpy.

“Yeah,” CB says. “Well, wait. I’ll take three of those ‘Insta-Win’ tickets.” He points to a lottery display sitting to the left of the cash register.

“Seriously?” Jenny wrinkles her nose disdainfully. “I thought you were smarter than that.”

The guy behind the counter smirks, then dutifully tears off three instant lottery tickets from the display, scanning each in turn.

CB hands the guy a ten-dollar bill, then waits patiently as the clerk counts out his change. He takes one of the coins and begins to rub out the first ticket.

“Can’t wait to lose, I guess,” the guy says to Jenny in a half-amused, half-annoyed voice.

Jenny leans over the counter to look, then laughs in surprise. “You just won a hundred dollars.”

“Huh?” The clerk looks down at the ticket. “Well damn. You did. Congratulations, I guess.”

CB laughs. “Shows what you know,” he says to Jenny. “Hey, buddy, where do I have to go cash this in?”

“For a hundred dollars? I think we pay out here. Hold on, I have to look it up.”

The clerk picks up a small pamphlet that says LOTTERY on the front, and starts paging through it. CB starts scratching away at the second ticket.

“Nothing,” he says. “Big shock. One more, then.” He starts scratching away at the third.

“For cash prizes of $100 and under we pay out here,” the clerk says. “You’re lucky, I guess. If it was any higher you’d have to wait till Monday and go to one of the lottery offices.”

“Not that lucky,” CB says. “If I won ten thousand dollars I’d be willing to wait till—hey, look. I did it again!”

“Uh… well, I need you to fill out some paperwork,” the clerk says. “And show me a valid ID. Then I can redeem those for you.”

Twenty minutes later they drive away from the rest area one hundred and fifty dollars richer. Jenny laughs.

“I don’t usually win twice.” CB grins and shakes his head. “That was unusual. But now we’ve got enough cash to get through the tolls and stop for gas again. We can keep doing that until we get to wherever we need to go.”

“How does that solve anything?” Jenny asks. “You still need to show an ID and fill out paperwork, remember? If the bad guys have access to EZ-Pass, they have access to the Lottery. They can track you by your wins.

“… you have a fake ID?” Jenny asks incredulously.

“What are you, sixteen?”

“Oi!” CB says. “Fake IDs weren’t invented by teenagers. There’s lots of good reasons to have official-looking identification that doesn’t trace back to the real you in any way.”

“Maybe,” CB says, “but people tell me I don’t either. And back in the day I was the Guardians’ deep cover guy, when they needed one.”

Jenny snorts. “The deep cover guy with a hairstyle thirty years out of fashion?”

“Geez,” CB says, “this is a tough crowd… Back then it was only fifteen. And it’s just gel, it washes out.”

“Every hero with a secret identity carries a fake ID,” CB says. “Either the hero identity or the mild-mannered reporter identity.”

Jenny shakes her head. “I never thought about that.”

“That’s good,” CB says. “The guys with secret identities want people thinking about it as little as possible. Anyway, this ID, and others like it, is what let me stay out of sight for ten years. That and one other thing.”

“What’s the other thing?” Jenny asks.

“What are you complaining about now?” Jenny rolls her eyes in exasperation. “Compared to what’s already going on, it can’t be that bad, can it?”

“Don’t ever say things like that,” CB says. “It can always be that bad. It can often be worse. In this case, I just figured out where we need to go.”

“That’s where I’ve been for the last ten years. I have some contacts we can use to lie low and start poking around. Also, I’m pretty sure no one expects us to go there.”

“OK,” Jenny says, trying to keep her voice steady. “I’ve just heard some stories about the place, is all.”

“They’re probably true,” CB says. “Even if whoever told the stories was making them up at the time. Still, it’s not like you’re immediately stepping into a war zone. There are parts of the city that are pretty safe, where life goes on and you almost can’t see the corruption. Then there are parts of the city that look like a post-apocalyptic movie set, where people take Darwin’s name in vain on a regular basis.”

“Which part are we going to?”

“… well, the bad part,” CB admits. “But we won’t be mixing with the locals much. It should be OK. Also there’s a hacker community who might be able to get you the things you need if you’re going to work on decrypting Alex’s file.”

Jenny takes a deep breath. “OK. If you say so. Will we be safe?”

CB snorts. “Fuck no. If your mother knew I was taking you there she’d kill me. Maybe twice.” CB settles back into his seat and gazes out the window. “I’d probably feel obligated to let her do it, too…” 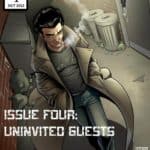 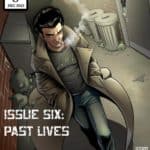