The Farraday City Morgue is a modern building, built when the crime families moved in and started renovating the city. The police stations, hospitals, and morgue are all state-of-the-art facilities. CB is amused that a city government so thoroughly owned by organized crime will spend so much money on a crime-fighting infrastructure—it seems counter-intuitive. Still, there’s a difference between “well-run” and “honest”—the city faithfully protects the people who can afford to pay for that protection.

He finds the room where the bodies are stored by calling the morgue from a payphone and pretending to be one of the Mayor’s aides, berating a nervous orderly who doesn’t want to offend City Hall. An autopsy room is reserved for that case, and it’s always kept locked and under armed guard. It’s an interesting complication.

He arrives at the morgue at 8:30 PM. It’s closed to the public by then, but it’s trivial to get in—he loiters around one of the smoking areas until an orderly comes out for a smoke break, banters with his fellow smoker for a while, then sticks his foot in the door when the orderly goes back inside. Once inside, it’s easy to stay out of sight: the evening shift is lightly staffed, and entire parts of the building are completely empty. Nobody expects to see him, so nobody does.

He makes his way to the room the nervous orderly described. Sure enough, when he peers around the last corner he sees a bored uniformed officer standing in front of the door, talking on a cell phone.

“Yeah, I don’t know. All I know is, if I don’t get her something this time I’m going to catch all kinds of hell, and I don’t want to deal with it any more. You know? I mean, it’s not like she’s my wife or anything…”

CB looks at the cell phone and winks. It pops. The officer frowns, then starts shaking the phone.

“Crap…” The officer turns it over in his hands and pries open the back. “Oh, come on, I know it had more of a charge than that!” He looks down the hall apprehensively, and CB pulls back to stay out of sight. A second later, the officer swears again, and muttering under his breath about a spare battery, he disappears down a side hall.

CB waits a moment for the officer’s footsteps to fade, then runs up to the locked door. He pulls out a thin, flat piece of metal from his trenchcoat pocket, wedges it between the door and frame, and pulls down forcefully. The door clicks, and pulls open easily. CB steps inside, pulls the door closed behind him, and re-locks it. A few moments later he hears the officer resume his post.

I’ll have to figure that out later, CB thinks.

It’s dark, so he fishes out his Mag-lite. He’s in an office with four desks. Each desk has a computer. One of the desks has a stack of folders on it. Swinging double doors sit at the other end of the room.

CB picks up the folders and walks across the room, swinging open one of the doors and stepping through. It’s the Autopsy Room, and it’s large: rows upon rows of cold chambers are set into the walls. He lets the door swing shut behind him, then flips the light switch. Cold fluorescent lights flicker on, and he sees that all but six of the cold chambers have name tags—the room is almost full.

How long has this been going on?

The last twelve tagged chambers are John Does—those are the ones CB discovered today—but the others are identified. A quick scan of names suggests that all of the victims are men.

The autopsy table is empty and clean, so CB spreads out the folders, going through each in turn. The police reports go back as far as six months. Going through the folders, he realizes the bodies in this room are only for the recent crimes.

Six months ago, the first known victims appeared—three men found laid out in an alleyway, arms and legs bound, gagged, throats cut. A month later, five more victims. Three weeks after that, another five. A month later, two more bodies, and for the last three months bodies have been popping up with increasing regularity, and in ever greater numbers. Seventy-three dead in all so far.

Toxicity reports show each victim had a form of anesthesia in their system, and the coroner suspects they were completely anesthetized before they were killed. The victims have little in common. There are victims with different races, different ages, different heights, different weights, and the brief background check added to each file suggests they’re from different economic, political and religious backgrounds as well.

“In other words,” CB mutters to himself, “other than being men, the only thing they have in common is the way they died.”

He wonders about the anesthesia. It’s an odd choice.

One of the folders holds a collection of police notes from each crime scene. CB studies these closely, trying to memorize every detail. Locations. Dates. Names of witnesses, possible suspects, possible motives, everything. When he finishes the file he checks his watch—it’s close to the time Larry said he’d be coming back for his notes. He hastily gathers each set and puts them back on the desk where he found them. He puts his ear next to the outer door, listening. He hears the guard humming to himself tonelessly.

Back in the autopsy room he rummages through some of the bins under the autopsy table until he finds a set of clean scrubs. He changes into them quickly, placing his trenchcoat into a large orange contaminated waste bag, then turns off the light as he leaves. He unlocks the outer door, opens it, and deliberately walks into the officer.

“Hey!” The officer whirls around in alarm, hand on his pistol. “Who the hell are you?”

CB stares at the guard blankly, then laughs bitterly. “I’m the guy who drew the short straw. Make the new guy do it, right? I better not get screwed over on this overtime, that’s all I’m saying.” He stifles a yawn. “I hope you guys appreciate this. I don’t see the rush myself. It’s not like the jokers in there are suddenly going to get more dead.”

The officer relaxes slightly. “I didn’t know anyone was in there.”

“Oh, that’s just perfect. They tell me to stay late and then they forget to tell the guy with the gun.”

“No,” CB says, “I didn’t. Which, by an amazing coincidence, is what I told everybody I’d find. Same MO, same cause of death, same everything. Only now there’s sand. Look… can I go?”

The guard laughs and waves him away. CB stalks off, still muttering to himself about bosses and overtime. When he’s out of the officer’s sight he grins, pulls off the scrubs, puts on his trenchcoat, and makes his way to the exit.

The police aren’t blockading the Swordfish any more, but the news of the day’s events has thinned the evening crowd considerably. When he walks into the bar, CB is greeted by one or two of the regulars and by Jerry’s frosty stare.

CB sits at one of the empty stools at the bar and smiles brightly. “How’s it going, Jerry?”

“No tabs tonight,” Jerry says. “I’m losing a lot of business because of you.”

“They’ll be back tomorrow.”

“The hell you are,” CB says. “I’ll bet any odds you want that Lieutenant Hoydt paid you hush money to keep quiet about everything. It’s probably more money than you’d make in a week.”

He doesn’t actually know any of this, but Jerry grunts in agreement.

“It’s still a pain in the ass, though,” Jerry says. “And don’t you go spreading that around, either. If people hear the police are paying me money, they’re going to start thinking I’m informing on them, and—”

“Shut up a minute.” CB holds his hand up, cutting Jerry off. He stares hard at the TV. “Turn up the sound, OK?”

Jerry snorts. “What, the news? Why the hell would I—”

“Turn. Up. The. Sound.” Something about the tone in CB’s voice makes Jerry forget what he’s going to say next. He turns up the TV.

“Everybody shut up a minute!” CB shouts, and the patrons in the bar settle down to stare at him curiously. CB ignores them. He stares up at the screen, transfixed, his expression a mix of interest and concern.

The TV shows the interior of an apartment—a posh one, from the look of it, with a view of what has to be Manhattan. Lots of glass and carpet—only the carpet is stained with blood, most of the glass is broken, and the furniture—nice furniture—is upended.

“…half an hour ago,” a woman’s voice says. “Police responded to the alarm and found the bodies of men in paramilitary uniforms, each armed with military-grade weapons. There are reports of another body on the scene who does not appear to have been associated with the attackers…”

Then: “I recognize that apartment.”

The picture cuts back to the newsroom, where an attractive, well-manicured anchorwoman gazes serenely into the camera. “We do not currently have any information on the identity of the victim, but we expect to hear a statement from the police any minute now—hold on please—I’m getting a report the police are issuing a statement now. We’re switching to our team on location to report this statement live.”

The camera changes to show a small podium erected in front of a building CB doesn’t recognize. Police line both sides of the podium, and an older man—CB recognizes him as the New York City Chief of Police—walks past the men and takes position behind the podium.

“I’m going to get right to the point,” the Chief says.

The entire bar is silent. CB hears his heart beating in his chest.

“I know you all have questions, but I’m not going to answer them now. I’m going to issue a brief statement now, with a more thorough press conference in the following days. This evening, roughly an hour ago, armed men stormed the private residence of retired Army Captain Alexander Morgan, better known as the hero Liberty…”

CB tenses. A wave of whispers roll through the bar, countered by frantic shushing noises until the bar quiets again.

“Based on an initial assessment of the crime scene, it appears that Captain Morgan was taken by surprise. He was able to fight off most of his attackers…”

The bar patrons mutter their approval. Even in Farraday City, Liberty is admired.

“Unfortunately…” The Chief’s voice catches. The room falls silent. “Unfortunately, Captain Morgan was not…” His voice catches again, and he clears his throat huskily. “Was not able to defend himself against all attackers. While he drove them off, he was wounded in the assault, and…”

The Chief looks up from his prepared statement. His eyes glisten in the camera lights.

“It is my solemn and unfortunate duty to report that Captain Alexander Morgan was pronounced dead at Mercy Hospital at 10:37 PM. Apparent cause of death was a gunshot wound to the head. This has been ruled as homicide and no expense will be spared by this department to find the responsible party.”

The TV switches back to the anchorwoman. She’s trying to keep up a professional facade, but it’s not going to last. Her right hand grips a pen so tightly her knuckles are white.

“We’ll… we’ll return after these messages with more updates and analysis on this tragic event,” she says.

The screen fades to black, then cuts to commercial. The bar sits in stunned silence. Finally, CB stands, expression unreadable.

Jerry looks at him nervously. “Yeah.”

“I’m going to need to borrow your phone again.” 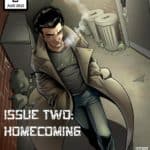