NARRATOR: A thump to the side of the head is an interesting way to start a conversation. It was obvious they’d used it before.

GOON: I wanted to get your attention.

JAKE NERO: Next time try “hello.” What do you want?

GOON: You know what I want, Jake.

JAKE NERO: For a guy who’s on a first-name basis with me you sure don’t look familiar.

JAKE NERO: Get to the point.

SECOND GOON: She’s been through a lot.

SECOND GOON: Poking around is going to stir up a hornet’s nest.

GOON: Nobody wants that. Especially the stick.

JAKE NERO: Why would the stick care? Its a stick.

NARRATOR: It turns out the answer to that question was “because if the stick doesn’t care it gets beaten to a pulp.” 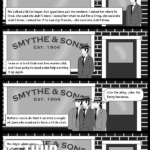 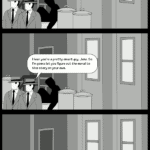 The East Wind and the Moon