ALAN: Thanks to Jack’s superior physical conditioning your life has been spared. now go away.

STEVEN: Oh, come on, Alan. It’s not like I’m the first peson in this group to get us in trouble with the law.

ALAN: What are you talking about?

STEVEN: Jack was hunted by the police! Johnny had to bore them with details about Jack’s job just to make them go away!

STEVEN: Writing the most malignant virus known to man is much, much worse than impersonating a US Senator just to mess with Wikipedia. Why can’t you cut me a break?

ALAN: Well for one thing, Jack didn’t wind up getting us fired.

JOHNNY: But Alan, you were mad at Steven even before Mr. Dreck replaced us.

ALAN: That brings us to the other thing.

(ALAN tries to strangle STEVEN. JACK holds him back.)

ALAN: THEY TOOK THE COFFEE MACHINE!

STEVEN: Maybe I’ll come back in a year. 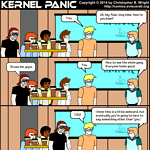 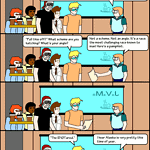 The Most Challenging Race Known to Man