ARNAULT DRECK: Alan, this is–

MARTY: Hey. Um, I didn’t expect to see you here.

ALAN: There is no way you can be serious about replacing us with the Dork Brigade.

MARTY: That’s not our–

ARNAULT DRECK: They have something Fundamental to our business that you don’t have.

ALAN: There’s nothing these guys have that we don’t have in spades!

ARNAULT DRECK: They have equipment, Alan. Do you have any equipment?

ALAN: We just got a coffee maker! 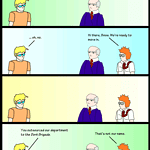 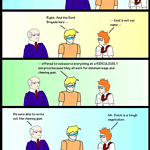 Blood from a stone

A Man Who Knows His Limits

Showing the Boss Around