MARK: I don’t want to go through this exposition twice!

MARK: FINE! Look, you know our top secret mission, blah blah blah, save the world from Steve Jobs’ ego and all that.

MAX: yeah, the secret mission that got canceled because Steve Jobs announced his retirement.

FRED: Should we be talking about a top secret mission in a public coffee house?

MARK: Yes we should. Yes, that’s the one I’m talking about.

MAX: So what’s the big deal? The man with the ego is retiring. Problem soled.

MARK: It’s fine. Max, what if I told you that the man with the ego isn’t the problem, the ego ITSELF is?

MARK: Max, Steve Jobs’ retirement won’t — wait, what? You have too much to live for?

FRED: Well there are video games. 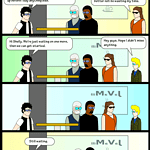 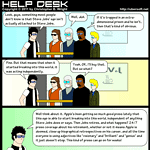