One Laptop Per Child is, in my opinion, a laudible and worthy goal… to create low-cost laptops that are then distributed for free to children in developing countries.

This is a worthwhile effort. There are people who feel the project is a waste of time, and that people should be focusing on other, more basic problems, but I believe that focusing on any one problem to the exclusion of all others won’t solve anything. OLPC won’t save the world but that doesn’t mean it won’t do good things.

That said, sometimes I worry about what exactly people involved in the project expect the children are going to get out of it. Take, for example, the following quote:

“A child doesn’t want to play the latest video games. He wants to be able to read a book.”
-Michalis Bletsas, OLPC official, as quoted in Linux Today

This quote is offered as an explanation as to why the laptop isn’t powerful enough to play the latest and greatest games available on the market today, and it makes me want to bang my head against the wall until I lose consciousness, just to give me a moment of sweet respite from the silliness of the idea.

There are good reasons why the laptop in question shouldn’t be able to play the latest and greatest games. The most significant is that it’s designed to use as little power as possible so that you can use a hand crank (actually, it seems to be more like a rip-cord) to power it up for short periods of time — this automatically rules out the power hungry high-end processors on the market today. And it’s perfectly reasonable, given that limitation alone, that it be designed for a more utilitarian purpose. Add to that the attempt to make building such a machine as cheap as possible, which once again rules out the latest and greatest processors on the market, and you have a legitimate case for focusing on your primary purpose — building a machine to be used for education — and eschewing fancy extras like supporting cutting edge 3d graphics capabilities.

But to suggest that children wouldn’t want to play games, given the opportunity?

You know, when I was growing up I loved books. I was what some would describe a “bookworm.” I read as many books as I could find. But I was a lot more likely to stay up until 3 or 4 in the morning playing Ultima III than I was reading a book. Given the choice between playing a new game and reading a book, I could have gone in either direction.

Maybe children in developing countries are substantially different in temperament from children in developed countries, and they hunger for knowledge while scorning digital entertainment, but I’d be willing to put money down that this isn’t the case. Games are fun. I don’t know why anyone would think that children aren’t interested in having fun.

It should be enough, when asked why their laptops won’t play World of Warcraft, to say “we’re building an educational machine, not a gaming machine. To make it a good educational machine that works in any number of challenging environments, sacrifices had to be made.” Implying that children would be uninterested in such games if they were unavailable reflects a philosophy about human beings that strikes me as unrealistic at best. 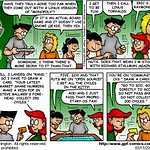 The Pay Me, Bug! Playlist