This will a gentle cut, a minor nick if you will — both because of the approaching holiday, when my thoughts ought to be focused on Love, Joy, Peace and GoodWill Towards Man, and also because I think the transgressor in this particular instance is more guilty of being too close to the perceived problem than he is of any kind of egregious journalistic excess.

That said, this caught my attention because it made the lists on Slashdot, and even the briefest episodes innocuous hyperventilation can suck all the air out of a room if you stuff enough people in it and get them to start hyperventilating at the same time.

The article points out that development for the GNOME and KDE desktops have slowed since 2002, when the latest full dot releases for each were released (3.0 for KDE, 2.0 for GNOME) and then follows that up with “not much has happened since then,” notes the introduction of very sophisticated desktops in Apple’s OS X and Microsoft’s Windows Vista, and bemoans that Linux may be falling behind in the desktop world.

But bubbles and bursting are metaphors used to describe hype-driven phenomena. The hype causes the bubble to expand, and expand, and expand, until the hype exceeds the bubble’s capacity to contain it and then it disperses into nothingness. The Dot com bubble burst because there were too many stupid people doing stupid things on the web, and investors could no longer ignore that they were throwing money at idiots. The Linux desktop, on the other hand, is not driven by hype — it is driven by necessity. People who develop for GNOME and KDE don’t do it because they want stock options, it’s because they want a good, stable, working Linux desktop.

And unlike the Dot-com fiasco, where talented programmers were paid too much money to develop ecommerce applications that allowed you to buy shoes for your neighbor’s goldfish online, development has been focused on mostly realitic goals and has borne fruit. KDE 3.0 was a substantial improvement over 2.0, which was itself a signficant step up from 1.0 — but KDE 3.2, 3.4, and 3.5 were all important dot releases (sorry 3.3, I don’t remember a thing about you). Linux is the only thing I use on my laptop (my primary computer) and the problems I have with it have nothing to do with the desktop and everything to do with device drivers.

I don’t see the problem the author is describing, and I wonder if he really sees what he thinks he sees, or if he’s seeing something else entirely. There is a difference in kind between “hype” and “excitement” — I’ll freely grant when each new version of a Linux desktop is released there’s a fair amount of excitement in the community (and a fair amount of sniping — but hey, that’s computers for you) but we have yet to see any of the silliness that is so prevalent with hype. We get “hey, we created a dialog that lets you set up a printer!” instead of “now you can use your wireless network application to turn off your refrigerator!”1 We get “our built in browser has one of the most advanced and complete implementations of CSS-2 currently available” instead of “this shiny, glossy title bar will make you want to lick the screen!”2

Is it reasonable to worry about GNOME’s loss of support and manpower? Yes. Is it understandable for people to wonder about the effect SuSE switching from KDE to GNOME will have on KDE development? Yes. But taking those concerns and turning them into a doomsday scenario where Linux desktop development collapses due to an overinjection of rabid hype — no. Not reasonable in the slightest. 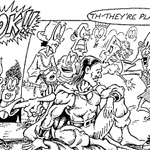 “Solitaire is all anyone will ever need”