I suspect that someone, somewhere, is going to look at this cartoon and decide that I am equating Islam with the Ku Klux Klan. Which is a wholly irrational reaction to have, unless you also believe that KKK and Christianity are exactly the same thing. That would be a very peculiar position to take given Dr. Martin Luther King’s profession (he was a Baptist minister), but I suppose it could be done.

It would perhaps be more accurate to say that I am equating a specific group within Islam with the KKK. A group that uses violence and terror in order to advance a political agenda, a political agenda that hides behind the justification of faith.

In September of 2005, 12 Danish cartoonists submitted a number of cartoons depicting the Prophet Mohammed. More than a few had political messages that were not flattering to Moslems in general. At least two depicted Mohammed as a bloodthirsty, crazed murderer. The rest were simply pictures of Mohammed, in no particular context. One was a picture of Mohammed walking in the wilderness, leading a pack animal. Another was a stylized picture of his face, using the crescent and star found on many Islamic flags as the outline of his chin and one eye.

Five months later — in late January, 2006 — the Moslem communities erupted in fury at these cartoons because it is considered blasphemous to depict the image of the Prophet Mohammed. There is some question as to whether the unrest was manufactured by the government of Saudi Arabia in order to deflect attention away from their own problems, but whether it was or not, the cartoons genuinely offended a large number of sincere, believing Moslems.

And a portion of that offended population went nuts. Danish embassies were burned to the ground. People have died. Death threats have been issued. The State Department of the United States of America, the Catholic Church, and France — an unlikely triad if ever I imagined one — have all released statements condemning the cartoons and warning that freedom of speech must be tempered with respect for religion.

Well, I have a healthy amount of respect for religion. In fact, there are a number of Moslems I respect very much right now. There have been Moslems who have nonviolently protested the publication of the cartoons. You don’t see them on TV or read about them in the news, because civilized behavior doesn’t make for interesting headlines, but there have been Moslems who have said “this is blasphemous, deeply offensive, and the people who have permitted it to happen should feel shame” without also committing acts of violence and murder. They ought to be the spokesmen for that side of the issue, but violence is oh, so exciting, isn’t it?

I live in a country where a man can submerge a crucifix in a jar of urine, call it art, and get funded by the Federal Government while simultaneously deeply offending a large indigenous population of Christians who found it not so much artistic as they did an affront to God. Not everyone reading this lives in the same country, but that is the standard by which I measure this conflict.

So, with that in mind, I submit this crudely drawn and clumsily executed cartoon to you all, in support of 12 cartoonists who have apparently had to go into hiding for fear of their lives. 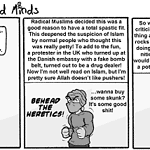 What a Piece of Work is Man: An Unweeded Garden