From College Roomies From Hell!!!, by Maritza Campos.

This message is for all my friends in the email spam community — you know who you are — and I hope that you’ll read what I have to say very closely.

A little bit of research — just a little — should back up my credibility here. A simple search through your databases should find at least one of my email addresses on every single mailing list you have. I’m saying this because I want you guys to know that I’m very familiar with your work, so I have the background to back up what I’m about to tell you.

You guys are getting sloppy. It’s embarrassing.

See, here’s the thing: just the other day I went to check my email and I noticed that an IMPORTANT ANNOUNCEMENT FROM EBAY had slipped through my spam filter. It announced, with the utmost urgency, that Ebay was worried that my account had been “hacked” so they were immediately suspending it until they could verify that I was actually me. This verification process was pretty simple and straightforward, thankfully enough: all I had to do was click on the link in the email and fill out the form on their secure site, making sure I provided my Ebay account number, login password, credit card number and expiration date, my bank’s funds transfer authorization number, and of course my ATM PIN.

I was, quite frankly, relieved to find out that the authorization process was so simple — it wouldn’t do to be locked out of an account I haven’t used for the last four or five years!

The thing is, as I was trying to collect all that information in order to let the brave and watchful people working Ebay account security know that I really was who I said I was, I got another email. This email said, in very urgent terms, that I had won my Ebay bid for a combination Microwave/Crockpot/Coffee Maker/Waffle Iron for only $500, and I needed to give the bidder my contact information immediately so it could be shipped. The contact information included my Ebay account number, login password, credit card number and expiration date, my bank’s funds transfer authorization number, and of course my ATM PIN.

What luck! I had just been collecting that information to re-activate my Ebay account! This meant I could kill two birds with one stone, right?

That’s when it hit me: how the heck did my bid go through after my account had been temporarily suspended? That’s when I remembered the first email warning me in no uncertain terms that until I could confirm my identity I would no be allowed to use Ebay’s services… so that bid shouldn’t have gone through at all!

Then I realized I didn’t actually remember bidding on a combination Microwave/Crockpot/Coffee Maker/Waffle Iron, and it occurred to me that even if I had I would have difficulty justifying a bid for $500 in order to get one. Maybe if it were covered in silver or platinum… but even then, wouldn’t the metal veneer screw up the microwave? (Unless the inside of the microwave remained uncovered, but that’s probably hoping for too much, isn’t it?)

And so it hit me: one of the emails was a scam. Someone was actually trying to trick me into divulging sensitive financial information! And since I couldn’t figure out which email was the fake, I had to assume both were.

It makes me sad to think that either my unused Ebay account is going to be deactivated or I am going to lose out on a honey of a combination Microwave/Crockpot/Coffee Maker/Waffle Iron, but I just can’t take the chance on which is real and which isn’t — or even, heaven forbid, the possibility that both emails are bogus.

And all because you guys got lazy.

Seriously… if the point of these emails is to fool the customer into thinking that it’s actually Ebay trying to get in touch with you, then telling the mark that their account is being suspended and THEN telling them that their bid is ready really destroys that illusion.

The sad thing is that all it took was a little cooperation on your part. If I had received the emails in the opposite order, well, just imagine the elation I would have felt at knowing that my bid for that magnificent combination Microwave/Crockpot/Coffee Maker/Waffle Iron had gone through, only to have that elation come crashing down when I learned that my account was in danger of being shut down because of evil account hacking! That would have paid off handsomely for the both of you. Instead, one of you jumped the gun, and I wised up.

Oh… and I don’t want to worry you too much… but this isn’t the first time.

It’s not entirely your fault. I know spamming has become such a growth industry that it’s becoming faddish. It seems like everybody and his kid brother is trying to get in on it, which means the old timers are suddenly forced to compete for bandwidth with a lot of young bucks full of enthusiasm but little finesse. I know how it goes: just as the old guard was starting to figure out how to make an authentic-looking Paypal email phishing scam, suddenly these n00bs show up sending messages with titles like “ringo headstar boris lice” and wham, all that hard-won credibility has gone up in smoke.

It’s a volume industry. I get that. And the need to keep one step ahead of the new wave makes it awfully tempting to just send any old spam out to any old address, hoping something will stick. But that leads to unfortunate and embarrassing situations like this one, and the more your industry expands the more it’s going to happen.

I know you don’t want to see your career go up in smoke due to professional negligence. That’s why I took the time to let you know that there’s a problem. Maybe you guys can get together and form an independent “spam traffic controller” that will prevent unfortunate collisions like this one from occurring. That might take a little time, and would probably cut into your margins at the beginning, but the increased efficiency would certainly pay off in the long run.

I just thought I’d bring it up. I am, after all, one of your biggest fans. 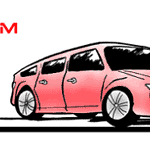 Status Report: Here Is Us, On The Raggedy Edge

Pay Me, Bug! is getting a new cover